A Complete system lineup to meet your production and manufacturing needs

Responding to expanding applications such as semiconductor and LCD manufacturing, machine tools, robots, and food processing machines, MELSERVO-J4 is flexibly coordinated with Mitsubishi Electric’s other product lines such as Motion controllers, networks as well as displays and programmable controllers. MELSERVO-J4 allows you to freely create an advanced servo system.

Enter the security code shown above

Industry-leading Level of Servo Amplifier Basic Performance
Speed frequency response of 2.5 kHz is achieved by applying our original high-speed servo control architecture evolved from the conventional two-degrees-of-freedom model adaptive control to the dedicated execution engine. Together with a high-resolution absolute position encoder of 4,194,304 pulses/rev, fast and accurate operation is enabled. The performance of the high-end machines is utilized to the fullest.

Robust Filter
Achieving both high responsibility and stability was difficult with the conventional control in high-inertia systems with belts and gears such as printing and packaging machines. Now, this function enables the high responsibility and the stability at the same time without adjustment. The robust filter gradually reduces the fluctuation of torque in a wide frequency range and achieves more stability as compared to the prior model.

Expanded Machine Resonance Suppression Filter
With advanced filter structure, applicable frequency range is expanded from between 100 Hz and 4500 Hz to between 10 Hz and 4500 Hz. Additionally, the number of simultaneously applicable filters is increased from two to five, improving vibration suppression performance of a machine.

Lost Motion Compensation Function
This function suppresses quadrant protrusion caused by friction and torsion generated when the servo motor rotates in reverse direction. Therefore, the accuracy of circular path will be improved in trajectory control used in XY table, etc.
* This function is not available with MR-J4W2-B and MR-J4W3-B.

A Variety of Functions for Various Applications

Position/speed control switches to torque control smoothly without stopping or changing the speed or the torque rapidly. Load to the machine is reduced, and high-quality molding is achieved for an application where control is switched from position to torque such as Tightening & Press-fit control or insertion of a work, and cap or screw tightening.

* This function is available with MR-J4-B servo amplifier with software version A8 or later.

* Not all of the servo amplifiers are compatible with all three of these servo motors. For the combination, refer to “Product lines” in the catalog.

For SSCNETIII/H compatible servo amplifiers, 2-axis and 3-axis types are available in addition to 1-axis type, enabling flexible systems based on the number of control axes.

*2. Some models are not compatible with the fully closed loop control system. Refer to “Product lines” in the catalog.

MR-J4-A-RJ*1 has a built-in positioning function, enabling positioning operation with point table, program-based, and indexer (turret) methods.
With this servo amplifier, a positioning system is configured without a Positioning module (command pulse). Positioning command is executed by input/output signals or RS-422/RS-485 communication (up to 32 axes). MR Configurator2*2 allows easy setting of the positioning data.

*1. Use MR-J4-A-RJ servo amplifiers with software version B3 or later when using the positioning function.

Setting position data (target position), servo motor speed, and acceleration/deceleration time constants in point table is as easy as setting a parameter. Up to 255 points are settable for the point table. The positioning operation is performed with a start signal after selecting the point table No.

* Point table can be set with push buttons on the servo amplifier or MR-PRU03 parameter unit along with MR Configurator2.

Perform positioning operation by specifying equally divided stations (up to 255 stations). The travel distance will be calculated automatically based on the number of equally divided stations set in the parameter. The positioning operation is performed with a start signal after selecting the station position No.
In addition to rotation direction specifying indexer and shortest rotating indexer, backlash compensation and override function are also available

MR Configurator2 enables to create various patterns of cam data. Command pulse or point table/program start signal is used as input to the simple cam. The input command will be outputted to the servo motor according to the cam data.

With the encoder following function, the servo amplifier receives A/B-phase output signal from the synchronous encoder as command pulse, and the input command will be outputted to the servo motor according to the cam data. Setting cam data that matches with the sheet length, a diameter of the rotary knife axis, and the synchronous section of the sheet enables a system in which the conveyor axis and the rotary knife axis are synchronized. Up to 4 Mpulses/s of input from a synchronous encoder is compatible with the servo amplifier.

Up to 255 points of Point to Point positioning are enabled when the target position is set in the point table in advance. Rewriting the next target position during a operation is also possible by the communication function.

Based on the data latched by the mark detection function (current position latch*), a target position is compensated by being written in the point table.

* When the mark detection signal turns on, a current position will be latched, and the latched data will be read with the communication function. 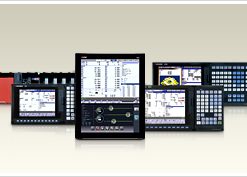 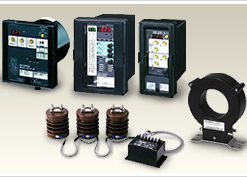 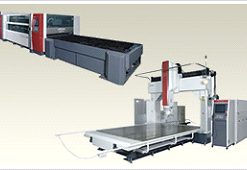 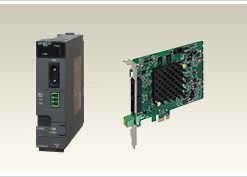 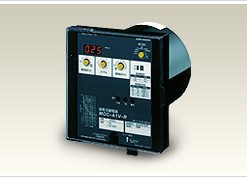 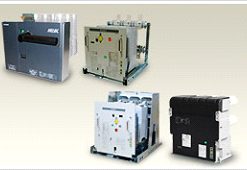 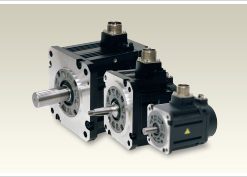 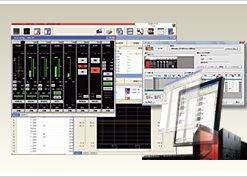